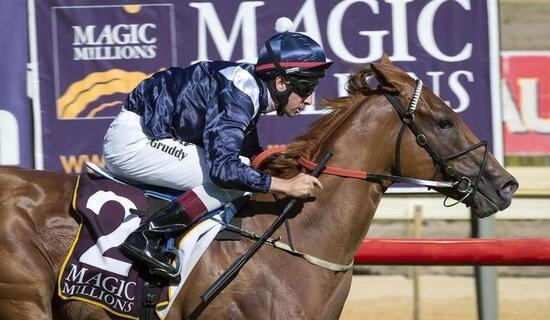 Powerful chestnut The River took the first step towards a rich double for trainer Trevor Andrews when he won the $250,000 Magic Millions WA 2YO Classic (1200m) at Pinjarra on Sunday.

Andrews said the Magnus gelding, who was ridden by Shaun McGruddy, would be set for the $500,000 Karrakatta Plate (1200m) at Ascot on April 2.

“His earnings are up to almost $200,000 after three starts and the best has yet to come. The River will go to a green paddock to have a freshen-up before he’s prepared for the Karrakatta Plate.”

Andrews has set a Magic Millions WA 2YO Classic record by training four winners since the race was launched in 1999.

Lucky Street became the first horse to go on from a Magic Millions WA victory and also win the Karrakatta.

Andrews’ second runner Trademark ($5.80) was unplaced after being caught wide.

The River gave McGruddy, 34, his fourth winner at yesterday’s meeting.

“He’s going to develop into a class performer,” McGruddy said. “I had worries about him strongly running out 1200m, but he did it easily.”

Andrews said he was interested in The River’s half-brother, a colt by Your Song, who will be JUoffered at the Perth Yearling Sale which begins next Monday.

“I reckon the colt will sell for a high price,” Andrews said.