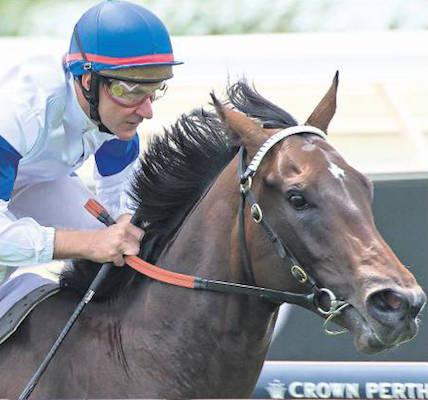 Lucky Street is on track for a Magic Millions double after returning to form in the LR Miss Andretti Stakes (1100m) at Ascot.

The Oratorio flyer (pictured) started an odds-on favourite on Saturday and kept finding in front to defeat First Among Equals by a long-head. He was coming off an unplaced effort in the G1 Winterbottom Stakes and a close second in the LR Summer Scorcher.

“They served it up to him and Paul (Harvey) had to be positive,” trainer Trevor Andrews said. “He’s only a three-year-old against older horses and he dug deep to win.”

Lucky Street (3c Oratorio – Rumours by Umatilla) was a $75,000 buy from Mungrup Stud at the 2014 Perth Magic Millions and has earned $810,350 including Westspeed bonuses of $110,000 for a syndicate that includes Andrews, Ken Gregson, Isaac Cohen and Ross Drage.

Oratorio is poised to break through the $1 million mark in earnings this season and he has 15 lots catalogued for next month’s Perth Magic Millions. The colt from Western Breeders Alliance (Lot 214) is the only yearling not being sold on account of Mungrup Stud.