ANDREWS TO RULE IN WA SIRES’ 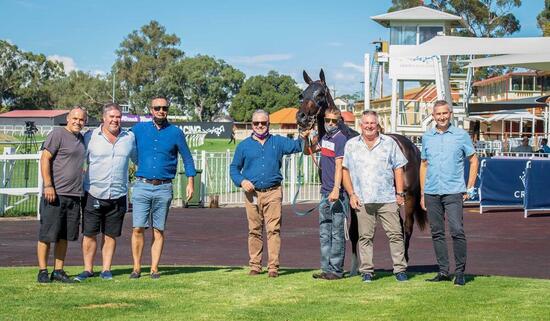 Top trainer Trevor Andrews hopes his decision to sidestep Perth’s premier two-year-old race with All The King’s Men a fortnight back can pay off at Ascot on Saturday.

After he bypassed a meeting with boom filly Amelia’s Jewel in the G2 Karrakatta Plate (1200m), All The King’s Men lines up in the G3 WA Sires’ Produce Stakes (1400m).

Andrews, whose stable fortunes have turned around in recent weeks, says All The King’s Men is ticking all the right boxes after a morale-boosting mid-week victory.

Starting a hot favourite, the King’s Troop gelding won the 1400m event comfortably and gave punters little cause for worry after circling the small field of six from last.

All The King’s Men’s maiden victory came at his fifth start and followed a slashing fourth behind Left The Building after a freshen-up in last month’s Listed Perth Stakes (1100m).

A $45,000 Perth Magic Millions yearling, All The King’s Men has drawn the middle gate in the Sires’ and from barrier five he will be ridden by regular rider, Joe Azzopardi.

“He’s come into a nice barrier which he hasn’t had for a little while,” Andrews told The Races WA.

“He’s had a confidence-boosting win which you think he will be better for next time around.

“The class of the race he won certainly wasn’t as strong as the other form horses in the race.

“But he’s had a win, a couple of extra days between runs and he’s in good order.

“He dodged a hard run in the Karrakatta, had a nice gallop on the grass at Ascot (Tuesday) and is in a good place I think.

“He looks one of the main chances in the race and I’m not unhappy with him at all.”

In an open betting race, All The King’s Men is currently rated a $6.50 chance.

Andrews says the Tabtouch market is on the mark.

“I think Ash Maley’s filly Penny On The Queen, hers was a good run in the Karrakatta,” Andrews says.

“Left The Building is one of the chances and Neville Parnham’s Snowdome, but maybe a query at 1400m.

“I’m confident we are an each way chance.”

All The King’s Men can continue a mini resurgence for Andrews and follow in the footsteps of recent Ascot winners, Sneaky Chance and Winifer.

“The tide has turned a bit and we’ve had a few winners,” Andrews said.

“It’s a confidence boost all round, isn’t it?

“There are more down days than up in this game, but you’ve got to focus on the positives.

“At the end of the day you need good horses to make you look good and we’ve a few good horses now.”