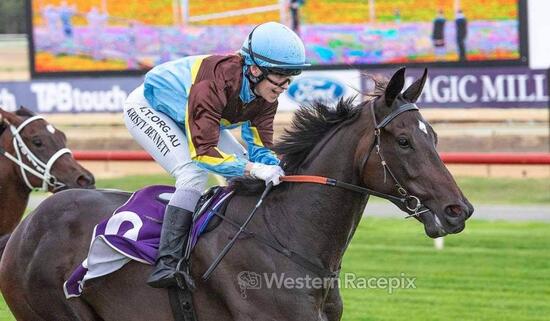 Story Book tracked the heavily-backed He’s Gold down the grandstand rail to score by over a length in the TABtouch Maiden (1000m). Ridden quietly by Kristy Bennett, the debutante sprinted through a gap and cruised to the line with her ears pricked.

The Trevor Andrews trained youngster had put the writing on the wall with two trials wins at Belmont in February. She was a $30,000 buy as a foal for TMA Racing from the Western Breeders’ Alliance draft to the 2019 Magic Millions Winter Sale.

“She’s a really nice type and we decided to get her out into the marketplace to show buyers the sort of quality foals that Lucky Street was siring,” Darling View stud manager Brent Atwell said. “Trevor was very happy with the way she went about winning and she will now be nominated for the Gimcrack Stakes.”

The G3 Gimcrack Stakes (1100m) is scheduled for March 20 at Ascot and is a dress-rehearsal for fillies into the G2 Karrakatta Plate on April 3.

Story Book (pictured) is the second foal of Top Show (Stratum) who won three races from 1300m to 1600m at Belmont for Neville Parnham. Her first foal Brooklyn Pier (Magnus) won an Ascot nursery for Parnham this time last year.

Andrews bought her yearling colt by Lucky Street at the Perth Magic Millions last month for $65,000. Top Show delivered a Snippetson colt in October and she is back in foal to Playing God.

Irish-bred second-dam Marriage Value (Marju) won on debut at Goodwood and was later exported to Australia after changing hands at the 2006 Tattersalls December Sale for the equivalent of AUD 65,900.

Lucky Street (Oratorio) was trained by Andrews and he dominated the WA juvenile calendar in 2015 winning the G2 Karrakatta Plate, RL Magic Millions 2YO Classic and LR Perth Stakes. He returned at three to claim the LR Miss Andretti Stakes at Ascot before bowing out with 6 wins in 12 starts and $814,350 in prizemoney.

Lucky Street’s part-owners Ken Gregson and Ross Drage are also in Story Book and the partnership includes some of the owners of Top Show!

Story Book’s stablemate I Can See Clara is ready to resume after doing his best work in the final furlong of a 1000m trial at Belmont on Tuesday morning. The Lucky Street colt was bred by Gervase Park and is from Ballarat winner Sweet Lorraine (Encosta de Lago).