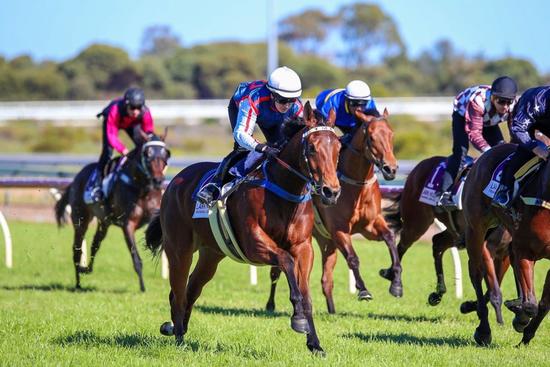 Quality filly Miss West Coast proved she would be a force to be reckoned with during the Ascot carnival when she bolted in first-up at Belmont Park today.

The Trevor Andrews-trained filly stalked the hot speed and pounced in the straight to beat Obstination ($31) and Warfish ($15).

Drinkwhatyoulike, the $2.20 favourite, dropped out to run fifth after she was involved in an intense battle for the lead with Mia Dolce.

Andrews is excited about Miss West Coast’s carnival prospects, with the Group 3 WA Champion Fillies Stakes (1600m) in November one of her main targets.

“She was off the bit a bit early and I thought ‘oh, they’re going to run her off her feet here’, but she picked up good ground and Jade gave her a beautiful ride,” Andrews said.

“She did what we expected today.

“I really think when she gets to the 1400 and mile of the Champion Fillies, she’ll be pretty good.

“Obviously if she wins the Champion Fillies we’d possibly back her up in the Guineas, but we’ve got a few runs to go before then.

“She’s just grown. She’s a big filly and I think this prep we’ll be even better for her.”

“The 1000 is a probably a little bit too short for her, but she’s just better than them.”

McNaught continued her top form when she also won on Some Sort today.