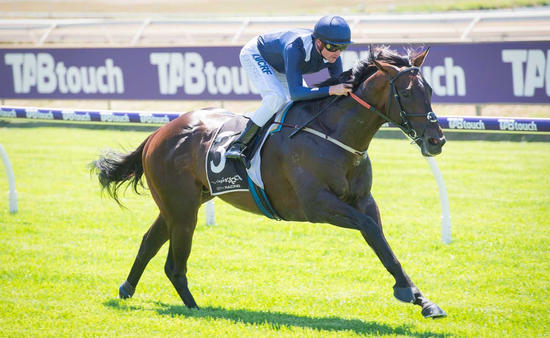 Trainer Trevor Andrews has unveiled blacktype race plans for impressive pair Divide The Sea and Blackfury, following their wins at Ascot this afternoon.

After an eye-catching third placing at Pinjarra on debut, Blackfury was well fancied to score a maiden win at his second start in the Hahn Superdry Handicap (1500m).

Despite jumping away slowly, jockey Jarrad Noske never panicked on the colt and settled him towards the rear of the field.

Blackfury then showed his impressive turn-of-foot in the home straight to score a one-and-a-half length win to Uni Time and Too Close To The Sun.

Trainer Trevor Andrews said he was nervous about the colt coming into today's event.

"I was just a little bit on edge," he told The Races WA.

"He's a big raw colt and we've had a high opinion of him.

"I just wanted him to come to the races today and have a good experience and do what we hope he would.

Andrews said he hoped to get the colt to the Listed Belmont Guineas (1600m) in June instead of the WA Derby next month.

"Going forward I'll give him a let up for three or four weeks," he said.

"These Blackfriars horses, because he won a Victorian Derby, you think they're staying horses.

Andrews then unveiled impressive two-year-old Divide The Sea in the Ascend Sales Trophy Handicap (1100m), who scored a comfortable win on debut with Shaun Mc Gruddy in the saddle.

Divide The Sea is expected to head straight to the Listed Perth Stakes (1100m) on March 23, then on to the Group 2 Karrakatta Plate (1200m) a fortnight later.

Andrews said he expected plenty of improvement from Divide The Sea going into the two-year-old features.

"He's not the ideal two-year-old type, but he surprises me all the way," he said.

"I said to Shaun 'you've got to be aggressive on him because he's quite casual.

"I think he will come out of this race a better horse."

After teaming up with Divide The Sea, Mc Gruddy returned later in the day to bring up a winning double aboard No Mean Feet in the Rentokil Initial Handicap (1200m).