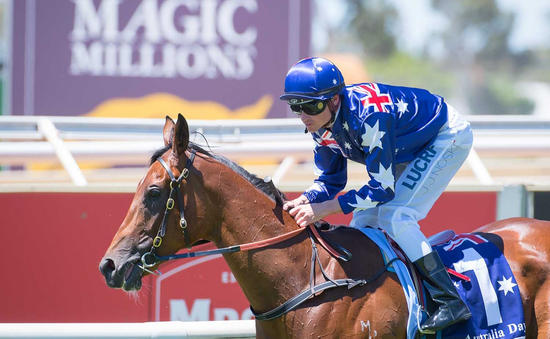 Impressive filly Miss West Coast has stamped herself as one of the key contenders for Saturday week’s Magic Millions Two-Year-Old Classic at Pinjarra, following her win in the David Grays Aglink Plate (1100m) at Ascot yesterday.

Miss West Coast had to carry the 57kg top-weight, but it proved to be no concern for her, as she led from start to finish with Jarrad Noske aboard.

It made it two wins in a row for the Safeguard filly, following her second on debut to Amarillo Rose in October.

Trainer Trevor Andrews said the filly deserved to be a leading contender for the Magic Millions, given her versatility of being able to race on the speed or with a sit.

“She took up a new role leading yesterday,” he told TABradio on Sunday morning.

“It added a bit of versatility with the way we ride her.

“She hadn’t won for three weeks and I had given her an easy week after her last win, then she had a few maintenance gallops.

“I said to Jarrad ‘you’ve got to ride her positively because I want to derive some good fitness out of this race’.”

“The positive thing going forward for this filly in the Magic Millions is she meets horses like Jericho Missile and Red Can Man better on weights,” he said.

“She will have 54.5kg and they will have 56.5kg, so that’s a significant turnaround in weight