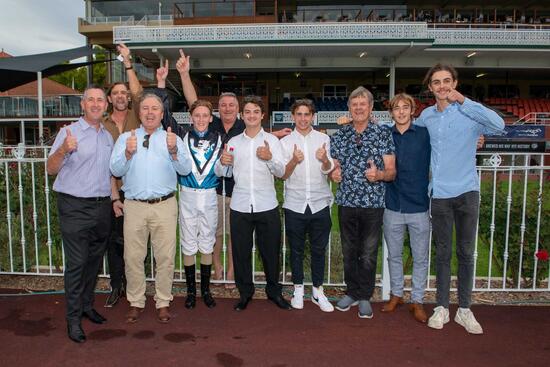 Trainer Trevor Andrews is certain Great Charade had ‘help from above’ following the gelding’s courageous win in the Tabtouch-Better Your Bet Handicap (1400m) at Ascot on Wednesday.

Ridden by Clint Johnston-Porter, Great Charade raced outside of the leader and looked vulnerable in the straight, but he refused to give in and fought on to defeat a charging Dipara by a long-head.

There were mixed emotions in the winner’s stall with Great Charade’s fourth career victory from 28 starts coming just a week after part owner Jerry Lobban sadly passed away.

“Our dear mate Jerry Lobban owns 50 percent of the horse and he has got all his boys here today (Wednesday).

“It’s been a tough week for everyone and a fitting end.

“He’s a champion bloke who has been lost.”

Wednesday’s victory was his first in town and followed a first-up third to Universal Pleasure at Bunbury.

Andrews believes there are more wins on offer for Great Charade, bought for $70,000 at the 2017 Magic Millions Perth yearling sale.

“I sent him up to John Lugg and he won a couple of races for us,” Andrews said.

“He got some confidence as a lot of horses do when they go to Kalgoorlie.

“He’s matured quite nicely and has come back in form

“Both runs this time have been pretty good.

“He had a really tough run (Wednesday) outside of the leader.

“He just fought it out and it was a massive effort.

“Obviously Jerry was sort of right behind him all the way.”