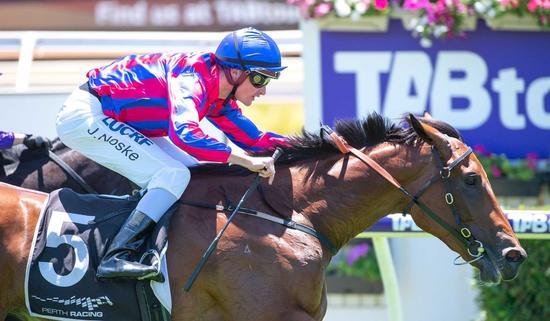 Andrews says Miss West Coast had improved since her maiden victory three weeks ago and expects another strong showing in the David Gray’s Aglink Plate (1100m).

“I have stepped up her work and she is in good order,” Andrews said on TABradio.

“She is doing really well in the stable and the feed bin.

“There are no complaints from my end.”

Miss West Coast, bought for $145,000 a year ago, ran a narrow second to Amarillo Rose when on debut last October.

Last-start she raced keenly in the early stages of her race before finishing strongly to chase down the leader Drinkwahtyoulike.

“She raced a bit fresh when first-up, but has probably come back to earth a little bit since that win,” Andrews said.

“She was entitled to get beat, she did a fair bit wrong, but her class got her through.

“She was a victim of circumstances at her first start when she was slow away.

“I would like to see her relax a little bit better if she doesn’t begin too well.

“That’s the key to getting her over a bit more ground.”

In a field of eight runners, Miss West Coast, a daughter of Safeguard, has drawn barrier one. Jarrad Noske keeps the ride.

Andrews says he expects Miss West Coast to be in a prominent spot in running.

“We’ll go forward and take it up or be running second,” Andrews said.

Andrews said if Miss West Coast ran to expectations she would progress to the Magic Millions WA 2YO Classic (1200m) at Pinjarra on February 9.

“That’s the plan, the Magic Millions in a couple of weeks,” Andrews said.

“It’s all exciting for the connections, barring anything going amiss.